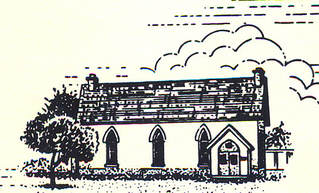 OUR HISTORY
We trace our roots to a band of English Separatists in the 16th century. In the context of the Protestant Reformation, these believers chose to risk life and liberty in order to follow their conscience. They sought to form a church that would be under God's authority alone, not bound by state edict or canon law. For these religious pioneers, freedom of conscience and the autonomy of the local church were guiding principles.

Property was purchased on the south side of Third South just west of East Temple (today’s Main Street). Independence Hall, an adobe building 33 feet wide and 57 feet long, was completed that same year and the first worship service was conducted in the new structure on November 18, 1865. The building cost $5,000 and could seat 200.


In addition to church and Sunday School activities, many literary, fraternal, political and civic meetings, dances, programs and schools were held in Independence Hall. In this building Jewish, Catholic, and various Protestant churches held activities until they could finish their own facilities.
At that time the Territory did not provide free education for children, and the only schools in the valley were private, fee-based schools and many children could not afford to attend. Pilgrim Day School was one of the schools started by the First Congregational Church and was built at the corner of Seventh East and Fifth South. Another school, which served Chinese immigrants, was started initially over a Chinese store, but later moved to Independence Hall.
In 1889 the Church decided to sell Independence Hall, the building that had been used for benevolent, educational, patriotic, religious, fraternal, social, and political purposes since 1865. The decision was sparked by a desire for a larger and better-equipped structure. Also a factor was the favorable economic climate for the sale of Independence Hall which was located in the expanding downtown business district. 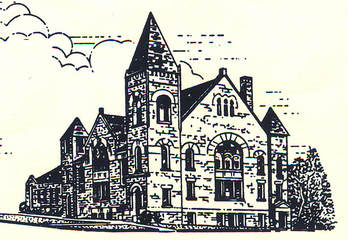 New property was purchased at the corner of First South and Fourth East, and the new sanctuary was first used in May 1892. The building had many Romanesque architectural elements and was built of gray sandstone. The sanctuary was octagonal with concave sides. It seated 550 on the main floor, and another 250 in the curved balcony. A curtain on the east side of the sanctuary could be drawn back providing access to the large Sunday School room which increased the total seating capacity to 1,200.

A beautiful organ, built by Farrand and Votey was installed behind the pulpit. A stained glass window measuring 7 by 17 feet was placed in the south wall of the sanctuary. The window is a depiction of “The Walk to Emmaus.” It was purchased from a New York firm, J. & R. Lamb, at a cost of $800.

Although the building at First South had been built with a bell tower, no bell was ever installed. The contract of sale for the property drawn up in 1890 included a clause excluding the use of a church bell. There’s an anecdotal account that the former property owner lived nearby and wanted to sleep in on Sunday mornings. 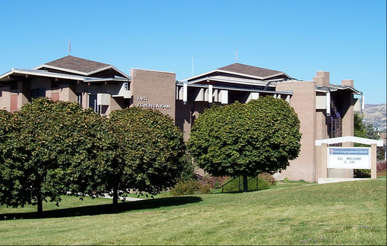 When the 1960s began, many members began to wonder if their 70-year-old building should be replaced. As discussions continued, it was decided that a move to another location might be best. A new location would provide enough space to build a gym and additional Sunday School rooms. Once again new property was purchased and construction began on the building that currently houses First Congregational Church at ​2150 Foothill Drive. The new building was dedicated on September 19, 1965. Part of the Service of Dedication included these words:
“In loving memory of all those whose hearts and hands have served this church; with deep gratitude for loyal comrades who have made with us this spiritual adventure: And with high hope for those who shall walk this way in days to come.”
In November 2022, following the sale of the building at 2150 Foothill Drive, the members of First Congregational Church cleared out that building and moved to the lower level of All Saints Episcopal Church located at 1710 Foothill Drive, where they now hold their church services.